The Moody Cow has been in it’s current ownership for the past 11 years. A now busy pub in a small village near Ross-on-Wye it needs to deliver something special to attract custom. The publican Chris Burgess has worked hard to build it’s reputation as an ethically run establishment offering great locally sourced food.

The pub had previously had a website that was failing due to being built using Adobe Business Catalyst which was in the process of being phased out. The decision was made to have a new site built, Red Fox New Media were selected for the task. WordPress was chosen as the foundation for the new Moody Cow website and a initial design was presented after out first meeting. This is the normal process that we go through with a number of stages of revisions in consultation with the client to reach the final look and feel.

Chris had already commissioned some great photography which was incorporated into the site. A table booking system was added linking into ResDiary to allow customers to reserve dining. Various design elements were created in the process of the build and a blog page included to allow Chris to keep his customers abreast of developments. Not only that but, after some training from us via Zoom, using the WordPress admin interface he is able to make changes to the site as he sees fit without any input from us. 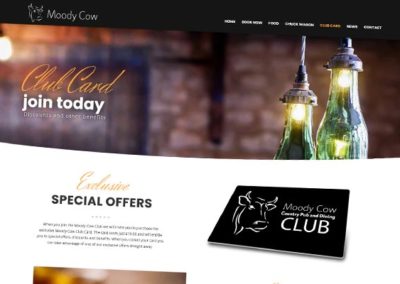